Doing the same thing over and over and expecting a different result. A prime definition of insanity.  The object of my current rage is the government-enabled massacre at the school in Florida.  Do you know what every mass killing in recent times has in common?  Something like this. 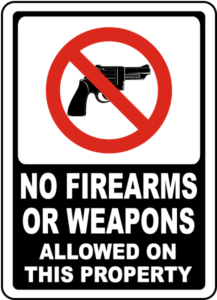 invitation to a mass murder to ‘c’mon in!

Yep, one sees these signs all over which to a psychopath, is an open invitation to come in and play.

A picture is truly worth a thousand word.

The problem today is that we’ve raised a couple of generations of pussies.  Children (and adults) who expect the police to protect them.  The police’ charter is to enforce laws made by, well, politicians.  The cops are NOT chartered with protecting you and I, regardless of the propaganda on the sides of their cars.

The movie,  “The 15:17 to Paris” By Clint Eastwood shows how things should be.  This movie is about three soldiers who took control of and disarmed several ISIS terrorists. That is called Valor.

It hits close to home.  During WWII, the NAZIs had cut a field telephone line and then set up an ambush with two machine gun nests, about 20 infantrymen and a tank.  My father, Eben, who held the rank of Major, chose to give his men an evening off and went out to find and fix the cut.  So he loaded up his BAR (Browning Automatic Rifle),  about 80 lbs of ammo, his 80lb pack and his 40 lb Signal Corps toolkit

As soon as he got there the Krauts opened up on him.  Instead of running away like a coward, He charged the nest armed with only a BAR and a 1911 Colt .45.  He killed all of them  Victory was short lived because as soon as the shooting stopped, the tank put an 88 mm round through his right hip and then it exploded right at his feet.  How he survived the next 4 days is a story all its own.  I’ll save that for later.  The Army offered him the Medal of Honor but he turned it down, saying that he didn’t think he did enough for that award.  He did receive a silver star with “V” for Valor.

The photo was taken during Clinton’s administration.Ã  It’s at camp Blanding where he took his advanced ground forces training.

He had me push him to that tank and asked to be left alone.  He told me later than he just wanted to sit there and validate his memories,  to see that valor and self-sacrifice still existed.  I wish he could have lived a little longer to see what modern soldiers are now doing.  They’d make him proud.

I bring this up now because as I got blind with rage at those kids running AWAY from the danger, I had to remind myself of what dad had really taught me.

Let’s get back to current events.  If a half a dozen or so students and/or teachers had been trained to assault the source of the fire, one or two might have been shot but that would have ENDED the attack.  ESPECIALLY if the teachers and responsible upperclassmen with the proper training had had firearms of their own.

Before health require me to retire, I was an NRA certified firearms instructor.  I had a lawyer come in to teach the legal aspects.  For close-in combat and self-defense training, I had a retired Ranger come in.   He would hammer home how UN-helpless one is in an encounter.  One of the drills I REALLY liked involved having a student stand outside the room.  The Ranger would position himself somewhere inside the room.  The student was instructed to come into the room and as quickly as possible take down the guy with the gun while loudly screaming at the guy which confuses the perp.

Almost everyone can win at this.  Very seldom could the Ranger get off a “shot”.  Slight men could do the drill.  So could petite ladies. The reason this works is not because of sheer strength – the Ranger was many time stronger than the student.  The student’s advantage is prior planning, speed and momentum.

If the attacker gets lucky and gets off a shot and maybe even hits the defender, the action will still give the rest of the group time to act.

Something snowflakes and maybe some not-so-snowflakes  just can’t wrap their small minds around is that when trouble strikes, NOBODY else is going to protect your safety or that of your family.  YOU are going to be the one to take care of your family and friends in a crisis.

We’ve been failing at stopping crazy men since Vietnam and the Texas tower shooting.  Since the failure rate has been 100%, maybe just maybe we ought to try something old that’s new again.  Train the employees and in the case of schools, the upperclassmen to shoot and equip them with concealed weapons.  Of course we’d have to make sure that the weapons weren’t used except when authorized but those are fine details.  I’m talking big picture now.

Once the defenses are established and the people trained, you know what would happen?  The psychopath will head somewhere else.

One of my guiding principle is John 15:13: “Greater love hath no man than this, that a man lay down his life for his friends.”

Maybe everyone could think about THAT while the politicians and media scream for more gun control (defined in my book as hitting what you aim at).

I hope you have a great evening,